About Our Church
celebration, joy and continual thanksgiving

St. Martin’s Ev Lutheran Church, a congregation of the Evangelical Lutheran Church in America, is about celebration, joy and continual thanksgiving. For more than 125 years, St. Martin’s has been dedicated to being the body of Christ in downtown Austin. We’re a group of caring, loving people with open hearts and minds who gather for worship, education, fellowship and mutual encouragement.

The story of St. Martin’s began four hundred years after the birth of its namesake, Martin Luther.

On March 4, 1883 a group of families of German descent met for their first bimonthly worship in Austin’s First Presbyterian Church. They were led by Reverend Henry Merz, a Swiss missionary who came to Texas after the Civil War and was called to Austin to lead the German mission church by the First German Evangelical Lutheran Synod of Texas and the German Home Mission Committee of the Lutheran General Council of North America. Three months later, the congregation of twenty founding families was given its name: Deutshe Evangelische Lutherische St. Martin’s Kirche. 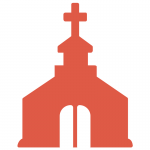